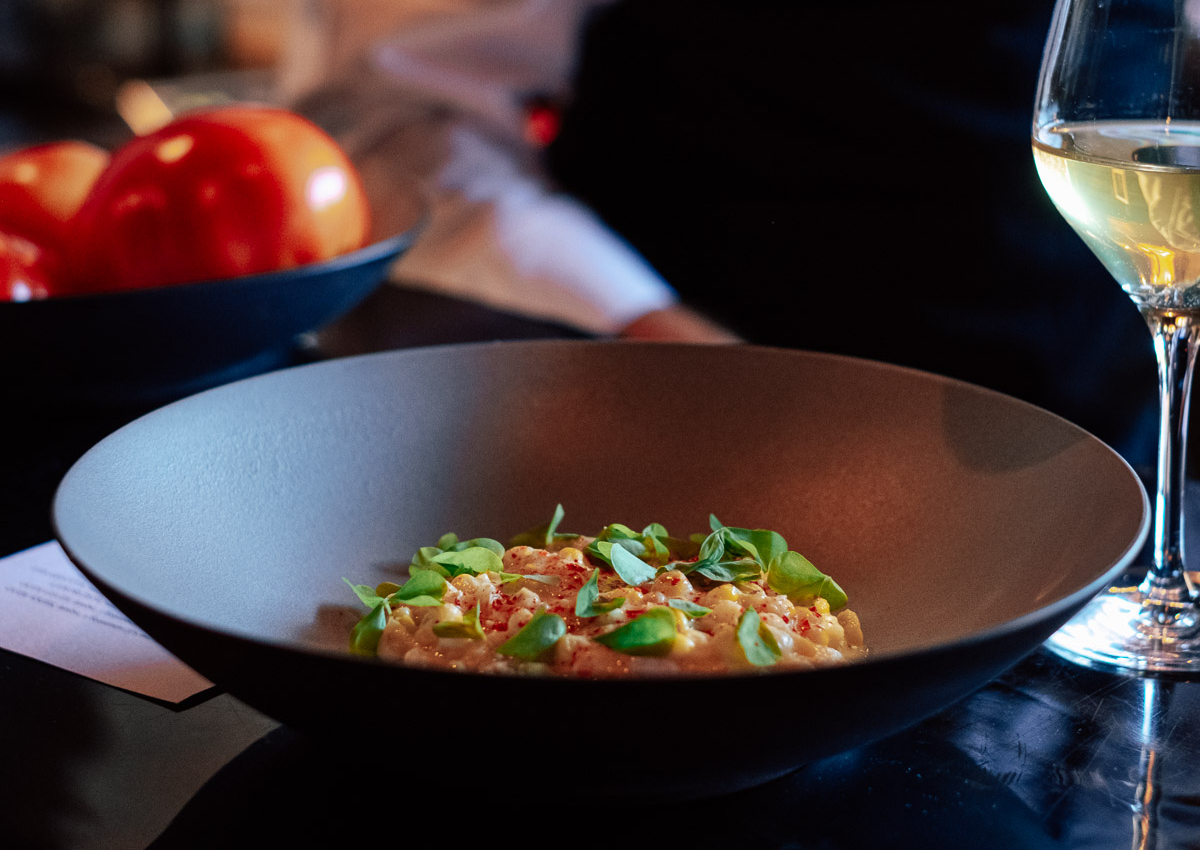 As residents of Montreal′s Mile-Ex, we′ve witnessed our neighbourhood′s transformation first-hand. Old industrial warehouses now host ateliers, video game studios, AI Labs, and some of Montreal′s trendiest galleries. Part of the district′s recent revitalization has been signaled by the arrival of bars and restaurants. Manitoba, which opened in 2014, has become a staple of the neighbourhood and a must-eat destination in Montreal′s bustling food scene.

Located at 271 Rue St. Zotique West between Café Dispatch and L’ABRI Architecture, Manitoba’s rise has mirrored the area’s resurgence, but its philosophy extends beyond Montreal. This eatery exists to take you on an organic experience closer to nature. Like other distinguished Montreal establishments, they serve premium ingredients by sourcing from Quebec - but Manitoba has the quintessentially laid back vibe that encompasses the Mile-Ex. For lunch on Thursday in August, we went to meet Manitoba cook Eric Gendron. Eric has a B.A. in Philosophy, rides around Montreal on a fixed-gear bicycle, and previously cooked for a renowned gastropub. We asked him to try pieces of the new Vallier collection for his day of cooking.

Manitoba has an exquisite layout. About a third of its ceiling - the lower portion near the entrance - is covered in wood slats that create a starry glow above at night. Towards the back, the floor space opens and the ceilings are higher, but the area maintains coziness. Most of the room-length bar faces directly into the restaurant’s open kitchen.

The afternoon we visited, the kitchen was illuminated by sunlight from the open garage door, exposing the backyard terrace and a large circular barbeque. The bar itself is made of charred timber finished with a veneer. Muted brown leather barstools set in cement blocks provided relaxed comfort you could really lean on throughout our meal. Seats toward the entrance featured views of the bartenders creating cocktails made from local spirits.

For our first dish, Eric served up a lightly seared seal fillet, which he felt was emblematic of the restaurant’s ‘raison d'être.’ The meat was sliced thin and featured a dry dip of roasted buckwheat, labrador tea, and mugwort. A topping of smoke-clarified butter really made the dish pop, perfectly blending with the seal’s seared yet fleshy texture. At Eric’s recommendation, we ate the sliced meat with our hands like the First Nation’s often do after a hunt.

As Eric stood behind the bar prepping our next dish, he told us that when co-founders Elisabeth Cardin and Simon Cantin leased the space - formerly a woodworking shop - they felt overwhelmed by the required renovations. Their vision, hard work, and determination, along with an underdog spirit, paid off. In 2014, Manitoba was named restaurant of the year by Eater Montreal and the Gazette called it ‘one of those restaurants where you want to hang out and soak up the scene.’ Five years later, not only has the cuisine thrived, but Manitoba feels like it’s come into its own.

Next up was what Eric described as ‘your childhood in a dish’ - cold Nordic shrimp from Gaspésie covered in a warm, creamy corn sauce. The dish was garnished with Gorria pepper from Quebec, one of the few local spices that survive winter. It was easy to taste why this recipe was a favourite - it had the perfect mix of cream, salt from the fresh shrimp, and spice.

To get the fullest experience, we'd recommend a seat at Manitoba's room-length bar. During our visit, we were witness to the sorting of fresh ingredients delivered daily to the kitchen, and watched closely as Eric made each dish in front of us. Nothing was premade - all the food and recipes were prepared in the moment.

To get the fullest experience, we'd recommend a seat at Manitoba's room-length bar. During our visit, we were witness to the sorting of fresh ingredients delivered daily to the kitchen, and watched closely as Eric made each dish in front of us. Nothing was premade - all the food and recipes were prepared in the moment.

Manitoba began as a strong idea based around a philosophy and quickly flourished into the unique concept that’s now a renowned Mile-Ex destination. They believed in themselves and the neighbourhood’s potential. They also saw a unique opportunity to bring nature’s food to the city. In the same vein, Vallier is driven by a similar spirit - designing apparel inspired by nature with the technologies to withstand its elements, but with designs fit for the city.

Throughout our visit, the conversation flowed freely and we witnessed first-hand the attention to detail that makes Manitoba one of Montreal’s top culinary experiences. We also got to see Eric in the Williamsburg Men’s Long Sleeve Oxford Shirt paired with the Leith Men’s Chino Pants, essentials that looked perfect with his vintage low-cut Dr. Martens.

Before we left the restaurant, we met co-founder Elisabeth Cardin and asked her what the name ‘Manitoba’ meant. In Ojibwa, Manitoba has a few definitions referring to a meeting point of a strait in the province of Manitoba, or the gathering of spirits. To Elisabeth, the name harkened to a place for gatherings and an homage to nature and all its riches - a naturalist setting fueled by an ecosystem in balance.

Considering the fresh cuisine and space the restaurant occupies, we’d recommend you gather at Manitoba any chance you get.