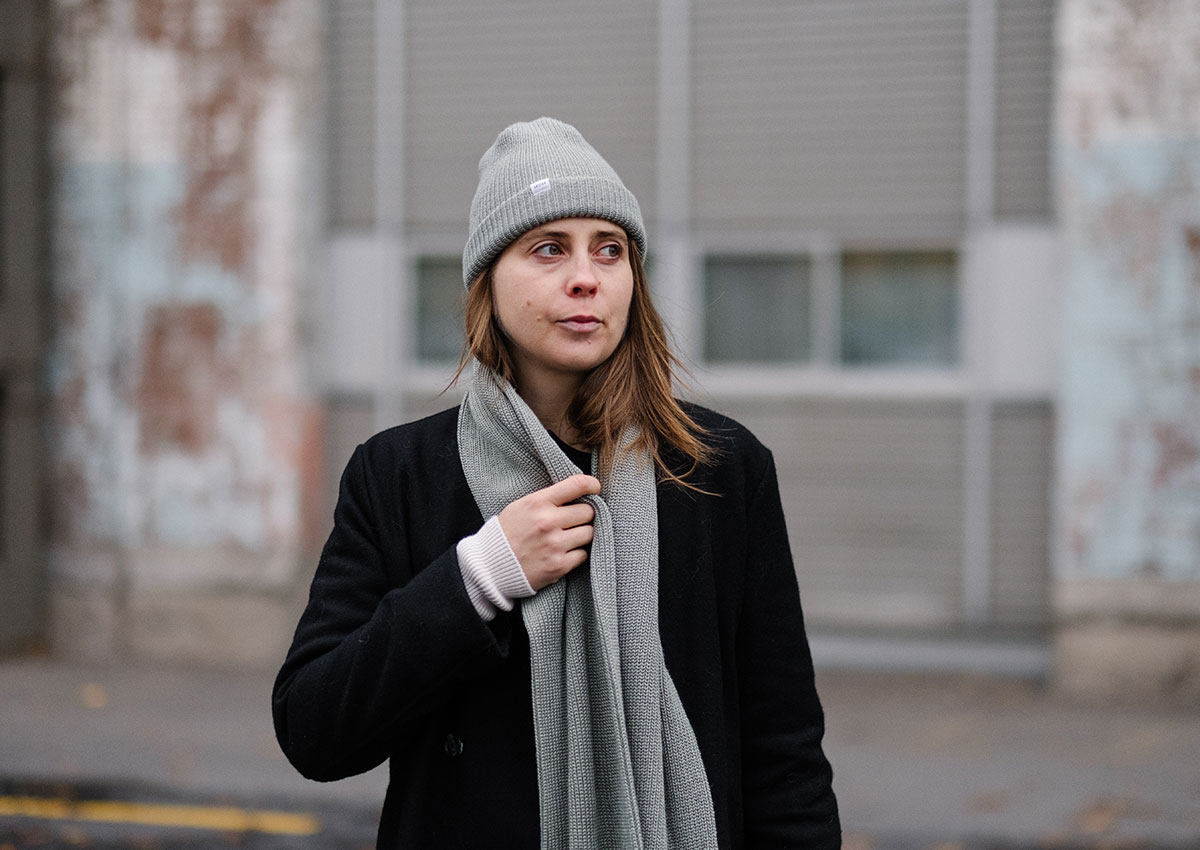 Keeping her feet on the ground is a balancing act for actress Ève Landry, seen in the cult series Unité 9 and District 31. But through the pandemic and inspired by visionary actresses, she’s adapted family, work, and even had some time to flesh out her own androgynous style.

A closer look at society/work

What concerns you socially?

If I do something environmentally-unfriendly, I pause, think about it, see how I could’ve done better - and I adapt. That's really my biggest concern, along with life in my neighbourhood.

I come from a small village. This "village aspect" is critical in my life. I’m still close to my neighbours, the ones I had when I was young. I understood city life would be fine if I could rebuild this idea. No matter what neighbourhood I lived in, I always took the time to get to know my neighbours - my butcher, my baker; everyone part of my community. It’s taking my place in the city, and making my children feel good about their neighbourhood. They know their neighbours, say hello to them, and see how getting involved in their neighbourhood socially and politically can make a difference.

As an actress, how did you get through the uncertainty of the pandemic, and how are you today?

I felt privileged: most of my projects have simply been postponed, not cancelled. I'm hoping they’ll happen at some point. I know how lucky it was not to be financially dependent on those projects. I got through the pandemic in a rather zen way, focusing on my well-being, and again, I felt extremely privileged to be able to do that.

However, when the government classified the entertainment industry as non-essential, it kind of hit me. Of course, I knew we weren't essential per se, but to be told that and hit so hard wasn’t easy. We were used as an example to show that this was serious, there was no room for fun, and that hurt.

Even today, I think there's a certain sadness lingering. Theatres are still not full; no-one wants to travel; people don’t want to go out at night. We've been forced to be comfortable at home, and now it seems that's brought us back to basics. Not necessarily bad, but we're going to have to find some balance between this new life and our previous one. There were a lot of benefits to going out.

You are now playing the role of Lieutenant Mélanie Charron in District 31. How did that come about and where do you get your inspiration for this role?

I got a call from the casting director, who thought of me for the role. I had other commitments, especially theatre, but the District 31 team worked around my schedule and I really felt welcome.

I'd never watched the show before, and didn't see how they'd made the previous episodes. I wanted to go in there with my own vision. The writer and I talked about how he saw the character, which gave me some ideas. It’s a direct, effective, deadpan character. I found out more about the character like the audience, little by little, week by week.


Theatre, cinema, daily television - what parts of you do these different projects nourish?

When I shoot drama like Unité 9 or District 31, it feeds the child in me who dreamed of being an actress. I grew up watching great actresses like Céline Bonnier and Élise Guilbault, who played troubled women with tragic destinies. This fascinated me.

Children's series cater to the workaholic in me. The scripts are not easy to learn, with a lot of gestures. They allow me to reach an audience that I like.

Theatre is really a leap in the dark. It appeals to my daredevil, the side that thrives on challenges. The bigger the challenge, the more I want to take it on. Playing the theatre allows me to take care of myself as well. If I'm in a February-March play, I know I can’t get sick. Staying healthy with two kids in daycare...not easy (laughs)! It's quite the challenge.

A closer look at fashion

In fashion, who is your greatest idol or icon?

Tilda Swinton. She fascinates me - very distinguished, classy, the type that speaks to me. I think I've seen all her films, I follow her on instagram...

Louise Lecavalier, too. I love her classic, androgynous look, but especially admire her attitude on stage.


Describe your own style.

Rather androgynous. I try to get a classic, timeless style. Nowadays I only buy clothes from Quebec, or second-hand for my children. I really like the tomboy look. I try to convince myself to wear fancy dresses to galas, but always end up wearing trousers and a shirt!


What is your Vallier go-to piece?

I wear the T-shirts all the time, and I love the Mayfair coat - classic, timeless, it’s going to last, and I can wear it many ways. Otherwise, I really like the Nishi flannel dress. It's the kind of dress I wear a lot.

A closer look at the person

Who is your biggest influence, both professionally and personally?

Professionally, Celine Bonnier. I wouldn't be an actress if she hadn't gone before me. Her way of acting is inspiring, and I always wanted to imitate her. I was fortunate to work with her on Unit 9, and got to work my scenes with her - exceptional. I learned a lot from her way of seeing things.

Florence Longpré too, she taught me how to manage this environment. She knows what she wants, and won't change to please others. She is also a very good friend.

Personally, my boyfriend! He accepts me as I am, and is with me during my personal development. He;s right there for the more difficult moments without ever judging. He allows me to be myself, and that’s precious.

When you’re offered a role, how do you decide whether to accept or not?

There's the old idea of three things: the people, the project, and how much it pays. You need two out of three. If it’s a really interesting project and the people are cool, but it doesn't pay very well, for me that's a ‘yes’.

The script - does it move me? Do I want to do it? If it speaks to me, and I trust the person doing the project - that can change everything -then I'll be tempted. I also want to act in projects that will appeal to the general public. It sounds trivial, but to take the time to create something that ultimately won't appeal to anyone isn’t something I'm really interested in. Even if I don't expect a breakout success every time, I always go with my heart.


With one role after another, how do you balance things out?

I'm pretty good at it now! It's been going well for several months, but there always comes a time when you lose your balance...you need a mix of rigour, living in the moment, and foresight. I'm a very forward-thinking person. For example, when I work a lot, I make sure the fridge is full so my boyfriend isn't scrambling, taking care of the kids. Simple things, but they make a difference.